Welcome to Our Brewery

One of the oldest steam breweries still in existence and brewing beer every week.

The 'virtual tour' below will guide you through our historic brewery and explain the main elements of the process. Just click on the numbers to find out more. 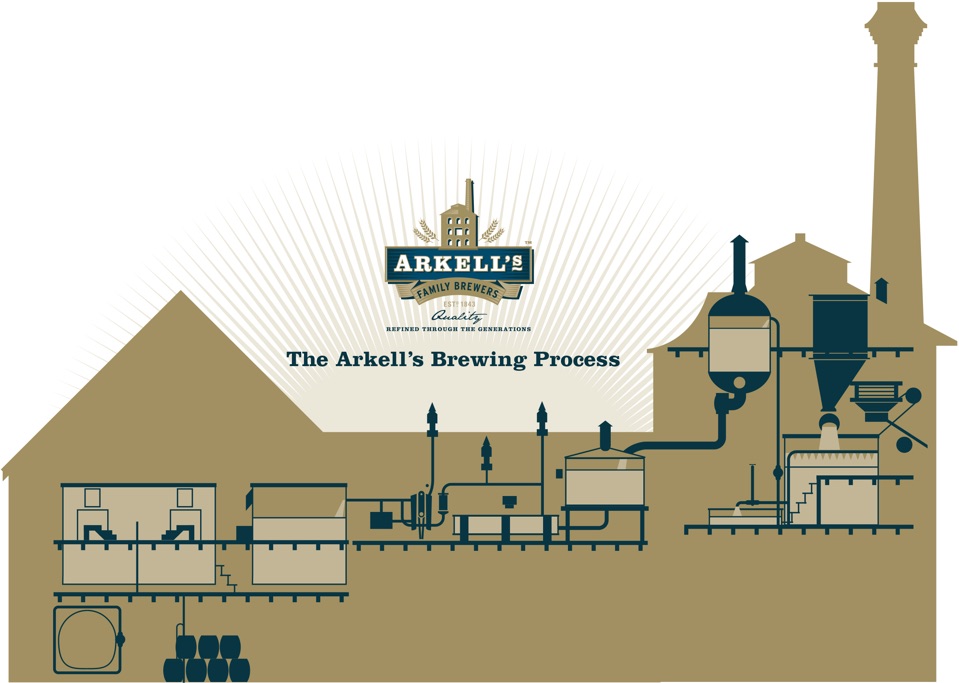 1GRAIN INTAKE: This is where we winch the barley up ready to add to the mill.
2GRIST CASE: The crushed malt collects here.
3MASH TUN: The malt is mixed with water at this stage.
4UNDERBACK: (Sugar dissolving vessel). This is where sugar is added to the malt and water mixture.
5COPPER: The sugar, malt and water mixture, now known as wort, collects here. Hops are then added to the mixture.
6 & 7HOPBACK & PARAFLOW: The spent hops are strained here. Then passed through a heat exchanger/wort cooler where the wort is aerated and cooled. At this stage fermentation begins.
8ARKELL'S YEAST: The yeast, which helps to give Arkell's beers their distinctive flavour, is kept here.
9FERMENTER: This is where yeast is added and fermentation takes place.
10CASK RACKING: The beer is transferred to casks here and left a few weeks to mature. Only then is it ready to satisfy the discerning Arkell's drinker.
The Master: ABV: 5.5% A special brew to mark James Arkell becoming the Master of the Brewers Company. A dark delicious stout with wheat, oats & roasted barley blended together creating a chocolaty foundation with flavoursome American hops.

Just click on the numbers to play a video explaining each process.

Welcome to Our Brewery 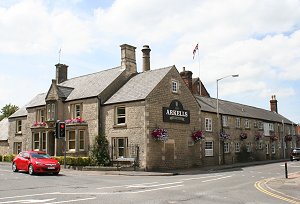 Arkell's Brewery is one of the finest examples of a Victorian steam brewery anywhere in the world.

But if this magnificent site looks like a museum, the visitor has to remind himself that it is still a fully-functioning brewery. Driving power in the building is supplied through a system that was first used here in 1910, though the belts are now powered by electricity rather than steam.

Countless original features remain from the day that John Arkell first moved his brewing business here in 1861 and generations of brewers have discovered that there is little scope for improvement to a time-honoured process. 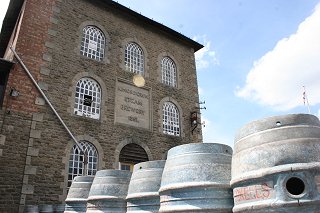 Arkell's is a tower brewery (see the picture, left) which works on the principle that raw materials are fed into the top of the building and beer comes out in casks at the bottom. 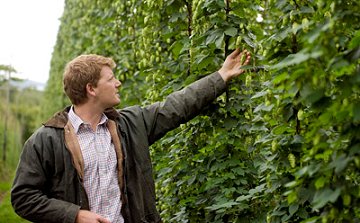 Arkell's beer is made from only natural ingredients - malted barley, water, hops and yeast are the base for the most of our beers with some exciting flavours added to our speciality beers such as honey or ginger.

John Arkell grew his own barley in his own fields in the early days of Arkell's and for many years it was turned into malt on the premises but it is now bought in from maltsters in East Anglia where harvested barley is spread on a floor and soaked in water to encourage germination. Almost as soon as it is begun, however, germination is stopped by heating the barley in a kiln. This process breaks down the sugars in the barley ready for brewing.

Also necessary to produce beer is a good supply of water or, as brewers always refer to it, liquor. The brewery has its own well but these days water is drawn off the local supply and mixed with minerals which add flavour and will later help the yeast to grow.

The third ingredient is hops, which we add in at two different points in the process, for two different roles. Firstly, hops preserve the beer and add bitterness. The later addition then adds aroma and flavour to the beer. Although for some of our newer beers we use hops from all over the world, the majority of our hops come from the UK. 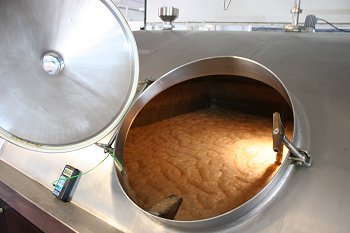 The ingredient that has most effect on the process, however, is yeast, a strange, almost magical organism which grows by consuming natural sugars. The yeast multiplies by around five times its volume and when it is later removed from the top of the beer during fermentation, most will be recycled and will be used to begin the whole fermentation process all over again.

As well as this reproduction, yeast also creates our alcohol when the sugars are consumed and a bi-product of this fermentation is a selection of unique flavours that give each beer and it's individual flavour. 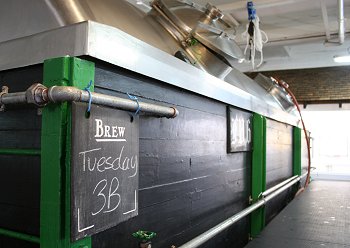 Before the malt can be mixed with the liquor it first has to be ground and through our mill, which once used to be driven by steam, this crushes the grains into a coarse flour which brewers call grist.

The next part of the brewing process begins around 6am when the grist passes through a device called a steels masher where it is mixed with hot liquor and turns into a porridge-like mixture called mash. Next it is run into the mash tun (see picture, below left), a large drum-like vessel where further liquor will be added and where it will settle for just over an hour. As in all parts of the process, timing to the minute is crucial even though it takes around a week to brew each batch of beer. 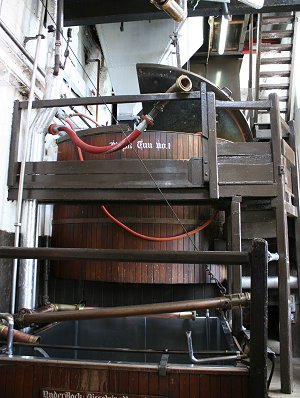 The amount of beer produced varies for each individual product. 3B - the biggest seller - is made in batches of 120 barrels (34,000 pints), whereas other beers can be as little as 25 barrels (7100 pints).

Another important element in brewing is the regulation of the flow of the beer at each stage and the sugary mixture in the mash tun - now called the wort - is carefuly passed through a device called a valentine (pic. below) into a small trough-like vessel called an underback before it is pumped up to the copper, a large, round vessel. Though of no further use in the brewing process, the grains that remain in the mash tun make excellent animal feed.

The sugar content of the wort will define the final alcoholic strength of the beer and needs to be carefully controlled at this stage. To ensure that all the sugar solution gets through to the copper, the wort is sprayed with hot liquor in a process called sparging. It is also time to add the hops and boil up the whole mixture for a further hour in the copper. Now it is called hopped wort and is ready for the next stage of the process. 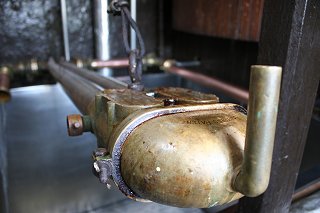 The hopped wort needs to be filtered and cooled before the yeast can be added so it is drained into another vessel, similar to the mash tun, called a hopback. As the name suggests, this is where the hops are held back and after the liquid has moved on to the next stage, the hops can be removed from the hopback to be used as fertilizer - yet another by-product of brewing.

Cooling down to 17°C is achieved by passing the hopped wort through a paraflow and when this is complete it is time for the hopped wort to be run into large, square, copper-lined or stainless steel tanks called fermenting vessels.

This is when the yeast, which turns the sugar into alcohol and produces carbon dioxide in the process, can be added. CO2 rises to the top and at first causes the beer to form a rocky head. But this soon turns creamy and the beer continues to ferment for up to five days before it is pumped into casks.

Temperature control is crucial during fermentation to obtain the right balance between alcohol and the desired flavour. The brewer achieves this by passing chilled water through coils in the fermenter and preventing excessive heat which could damage the yeast and spoil the beer. 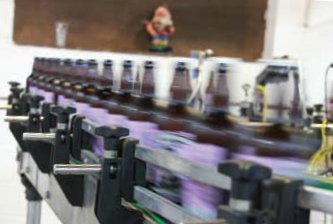 Removing the beer from the fermenting vessels and pumping it into casks is known as racking and takes place in the cellar, six feet below ground level. Casks typically hold 9 gallons, though 18 and 4.5 gallon casks are also used by Arkell's.

Down in the cellar it is even cooler than in the rest of the building and metal casks are lined up to receive the beer before they are rolled along tracks to despatch. The only alteration to the layout of the brew house in its history was made in 1982 when an extension was added to the rear of the cellar to allow for increased production.

The brewer's last job before the casks leave the brewery is to add finings, which come from the bladders of sturgeon and are the best method for clarifying the beer.

But the brewing process is still going on. 'Real ale' is cask conditioned, which means it is still fermenting when it is in the cask and will continue to do so, long after it was been delivered to the pub. The fermentation process, in fact, takes around two weeks in all, so the quality of the beer that is dispensed by the pub calls for significant skills from the landlord who has to ensure that it is properly settled and ready for consumption before he connects the cask to his pumps. 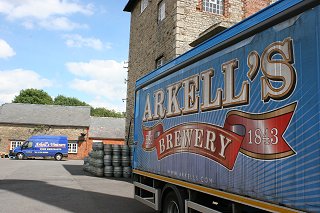 Not all the beer leaves the brewery in casks, however. A bottling plant, which was opened by Swindon North MP Michael Wills in 1997, ensured that Arkell's beers could be enjoyed at home as well as in the brewery's 100 pubs. The machine cleans, fills, caps, labels, packs and even shrinkwraps the bottles.

We also fill some of our beers into kegs. For these we gently micro-filter the beer for added shelf life and pressure fill our kegs to be sent out to our pubs.

Because nearly all of Arkell's pubs are within a 45-mile radius of the brewery and most are much closer, a regular, fresh supply of beer can be maintained and, unlike larger breweries, production can be varied from day to day, according to consumption.

This is yet another reason why Arkell's beer is not only of a high quality, but of a consistently high quality.

Arkell's Brewery is Swindon's oldest established company, and fittingly, its home is a major landmark at Kingsdown on the outskirts of the town. The brewery was established here in 1861 on a ten-acre site behind the original Kingsdown Inn. 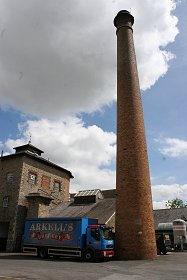 The tall brewhouse is situated near the front of the site, surrounded on two sides by the attractive courtyard. Just outside the brewhouse is a plaque unveiled by Field Marshall Sir Roland Gibbs, Lord Lieutenant of Wiltshire, to commemorate Arkell's 150 Anniversary in 1993.

Only six years after the brewery was built, expansion of the business made it necessary to convert the original Kingsdown Inn - across the courtyard from the brewhouse - into brewery offices, whilst The Kingsdown Inn was relocated in a new building across the road.

Behind the brewhouse stands one of Stratton's most familiar landmarks, the brewery chimney (pic. left), which was built in 1937.

We hope you have enjoyed this virtual tour of our brewery and hope that it has given you an insight into a traditional brewer. We regret that actual tours of the site are very limited and usually by invitation only.